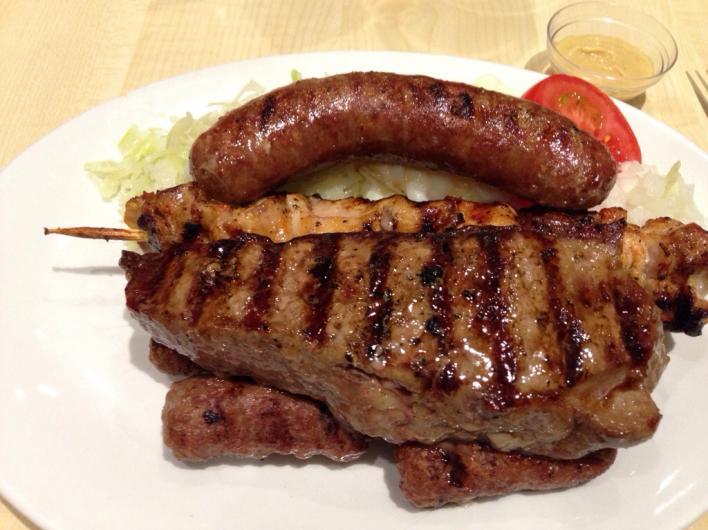 This was recommended to me when I asked for something fancy.

The small porterhouse turns out to be enough meat for a meal, on its own. It’s a nice, juicy piece of meat, but nothing exciting. The mustard I’m given is extremely mild, and there’s not much of it.

The giant chicken shaslick is, again , soft and juicy, and well-cooked, but it doesn’t really have a taste other than a few spots of char on the outside.

The sausage fits the same formula as everything else here.

The slaw doesn’t have any mayonnaise. It may have a small amount of olive oil or other tasteless addition. It’s surprisingly not bitter, and manages to be edible but very boring.

I won’t bother reviewing the slice of unadorned tomato, but the potato salad is as mild as everything else. Not flavourful, but not at all offensive.

I only get half way through my feed. This kind of food is my definition of a 5/10 score.

I’ve had this kind of meal before, at Taverna Greek Psistaria. For this kind of price, you can either get fine cuisine, or enough unadorned meat for two people.

This time, I decline the doggy bag.

There is no dessert here. That’s probably a good thing. I have no room for it, and it might be a scoop of vanilla ice cream, or a finger bun.