Place is packed, but there’s a free table.

Recommended by the waitress. Not exactly fancy, but delicious. (Allegedly.) I decline the waitress’s suggestion that I order two full-size main courses, and just choose the best of the two.

I hoe through these six chops. It’s a lot of chops, but I don’t mind. They’re nice and lemony, herby, and salty.

The big chips aren’t anything exciting. They’re just regular chips, but with extra potato. After eating six chops, I can’t fit in too many of these, anyway. I realise that the little white dish contains yoghurt, which was probably supposed to go with the lamb. I had assumed it was for the chips.

I have no idea why there are slices of pita bread in the centre of the plate. If I had removed the fat and bones from the chops, I guess I could then have cut the chops into chunks, and eaten them with the yoghurt and bread. Otherwise, it’s just pointless bread.

After this, I eat the salad. It’s just some salad vegetables with a mild dressing of olive oil and balsamic vinegar.

I guess I’m just not a big fan of Greek food. It’s all very simple, being not far removed from its raw components. If I were Greek, I might be able to relate to this, but as it is, my experience of Greek food ranges from simple and pleasant at best, to fish-and-chip shop-quality fodder at worst. 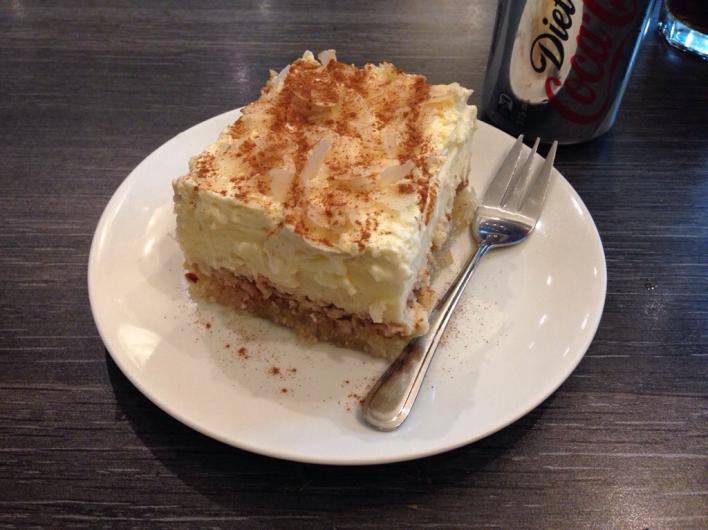 Dessert is from a cake display. All the usual Greek desserts here. Upon recommendation, I order the kataifi.

The thready base of the dessert is moist and infused with honey. This adds a lot of the dessert’s sweetness. The central layer of what I assume is semolina custard, is much less sweet, and is full of almond bits.

The top layer is cream and almond slivers, but it’s not thick enough to make the dessert sickly.

I don’t make it through this large cube of dessert, but it’s probably one of the better kataifi I’ve had. The stringy, nutty honeyey, base really stood out here.

This meal has greatly helped me on my way towards becoming a fat person. :)